The Torre Diamante, inaugurated on September 14, 2012, is usually called the Diamantone (literally, the “Big Diamond”) or Diamond Tower, itself a translation of its Italian name.

This building has a multifaceted structure, similar to that of a diamond and is 140 meters tall. Such an height makes this structure the fourth tallest skycraper in Milan, as well as the tallest steel building in Italy.

From April, 2015 onwards, the Samsung company reserved a whole part of this building (called a Diamantino, literally a small diamond), thus originating what is now called the Samsung District.

The point of the Torre Diamante can change its colors, therefore becoming an interesting and suggestive background.

This tower was also the main stage for the second season of the Italian edition of The Apprentice. Furthermore, the final scenes of the Italiano Medio movie by Maccio Capatonda, a popular Italian comedian, were filmed both inside and outside the tower. 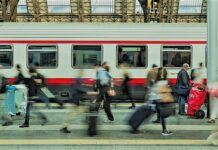